This morning was the first time I have ever traveled somewhere without a family member (or my sister). I actually was pretty proud of myself as I sat in seat 11D surrounded by a sea of strangers – I had successfully embarked on my journey without hyperventilating or having a panic attack. But seriously, I have proved it to myself that I can in fact survive on my own. But, I still miss my sister (love you Ali!)…

Anyway, we arrived in NYC around 3:00PM and took four cabs (our group has 16 people in it) to the hotel in Chelsea. From there we had the rest of the day to ourselves, so I decided to go exploring with two of my friends, Valerie and Wendy. We walked to the nearest subway station and took a train to Washington Square to meet up with an old school friend, Nureen, who transferred to NYU this year. Nureen took us on a walking tour of NYU and we ate at Mamoun’s Falafel where I got a tabouleh pita sandwich for a whopping $3. It was quite delicious! We then visited Washington Square park and watched some street performers (Nana and Ali – I swear we’ve seen them before, they lined up several crowd members and jumped over them all). After the demonstration we watched the Sand Man make some beautiful sand-art on the sidewalk. Later, after she had given us sufficient directions to continue our voyage, we said goodbye to Nureen. From there I took my friends back on the subway and traveled to Times Square and we roamed around looking at everything I could show them: the theater district, the Disney store, the Hershey’s store, some more street performers… According to the mood reader at the M&M store my color is silver which means that I “secretly want to be a famous mime” – it totally knows me. In the end, it was kind of fun getting to show them around. I felt like a local! 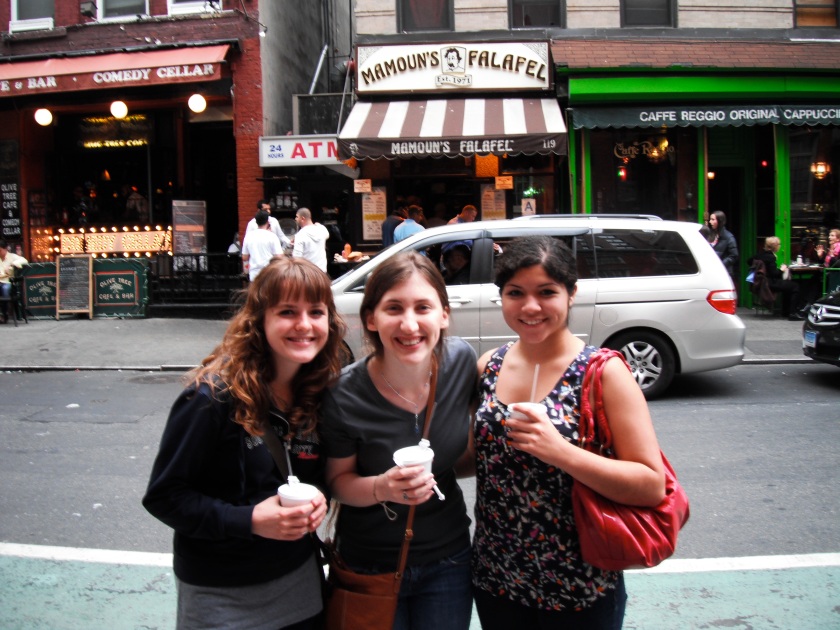 I made sure to scout out the theater where I will be seeing “How to Succeed in Business” this Thursday to make sure I knew what was around it. I discovered that it is right next to where we saw “Next to Normal” last year and therefore near the Marriot Hotel where I can easily get a cab (Nana and Ali – right next to that burger place where we waited and got autographs). Finally, at about 8:30PM, we decided it was time to head back. We thought it would be nice to walk back to the hotel instead of taking the subway (it was cheaper and much more scenic), so we walked 25 blocks back. It was a pretty straight shot to the hotel.

Overall, the day was pretty relaxed and I enjoyed not having a set schedule. It was fun for once to just walk around aimlessly. Tomorrow we start our OneShow activites and I think we’re going on agency tours which should be pretty cool. The only issue is that I think that they may split us up with other students who aren’t in our group which might be a bit awkward but exciting at the same time.

I’ll keep you all posted!