You know the movies about twins who don’t they are twins until they randomly run into their twin who just so happened to be in the exact same place at the same time and they have that double-take moment when they realize that there is someone standing in front of them that looks just like them? Well, those scenes always kind of bother me, mostly because that sort of thing doesn’t just happen once in a blue moon – they happen to me on a weekly basis. Every so often I’ll see a photo of my twin sister or sit across from her at lunch and think, wow, we look freakishly alike. There is someone in this world who shares my gene pool, my own personal womb-mate. It’s weird to think that I’ve shared more with my sister than I will ever share with anyone else in my lifetime. And I guess, for what it’s worth, movies kind of grasp that state of wonder and amazement. But, movies don’t really show you what it’s like when that feeling is gone. I don’t mean to be a downer, but my sister informed me that twins die an average of 10 years apart. Do you know what this means? It means that one day, my sister or I will qualify for membership into the Twinless Twin Foundation (not fake, look it up, it’s really sad). I just cannot fathom waking up and knowing that the person that I share so much with isn’t there. Imagine the opposite of what they show in movies. I wonder if it is even possible to illustrate that feeling of separateness. I’d be interested to see Hollywood attempt that story. 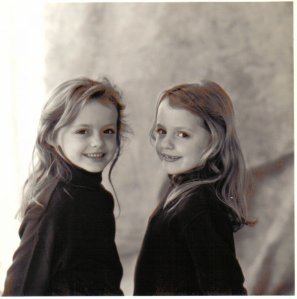