Yesterday morning we awoke in Antalya and quickly looked at some ruins that were a few minutes walk from our hotel. We ended up taking longer than scheduled, which is typical for us it seems, so we didn’t leave till around 11am. Then it was on the road for seven and a half hours to Göreme in the Cappadocia region. 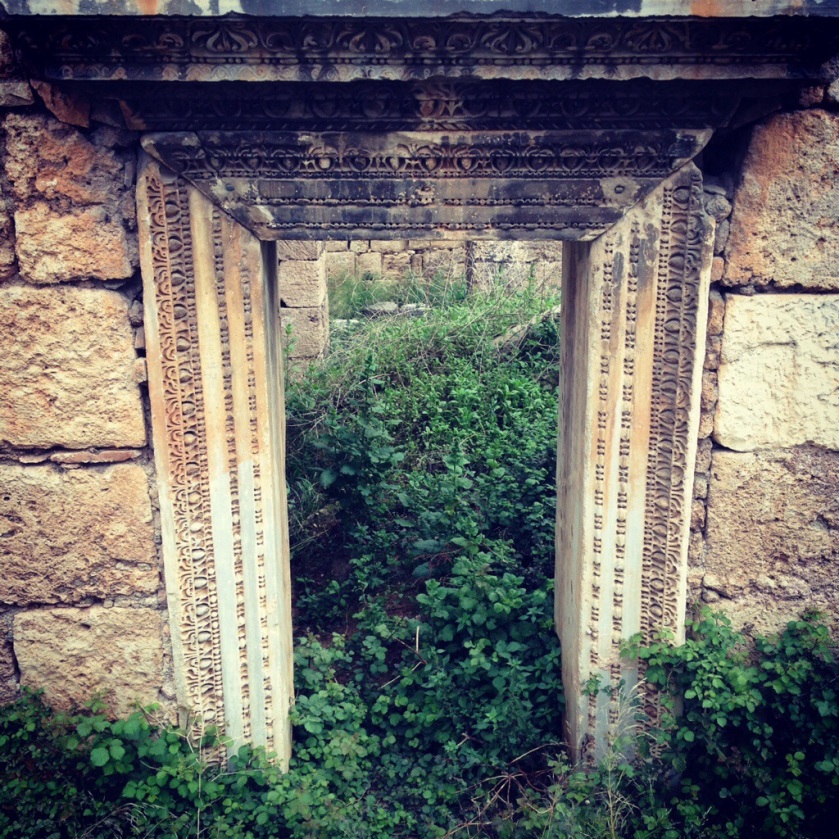 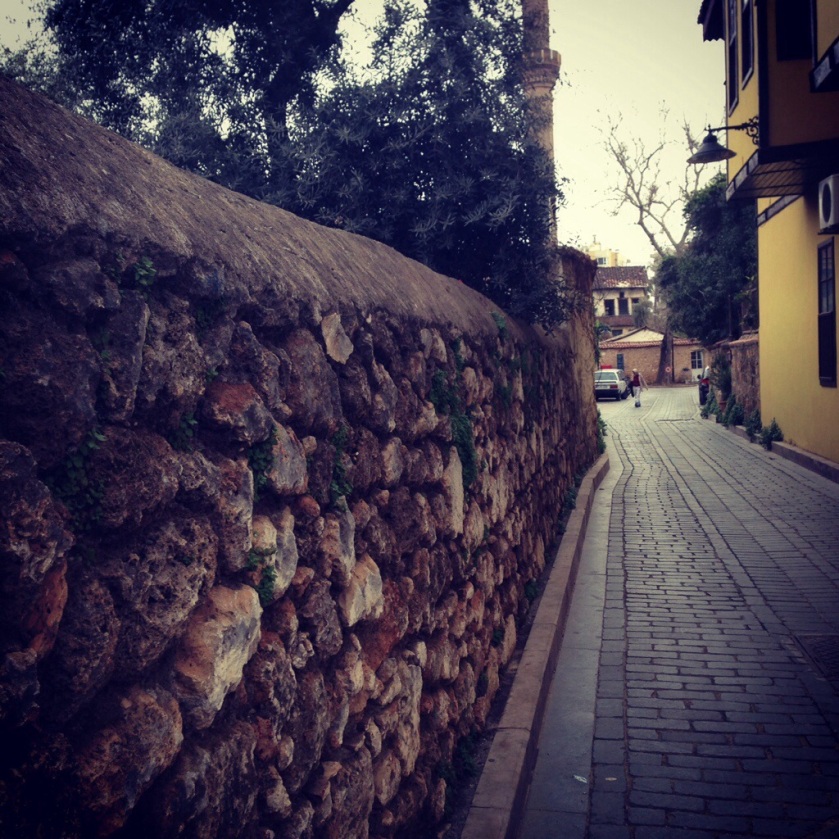 At first, I though the drive would be awful and long, but it ended up being one of my favorite days. During the drive I was able to process everything we have done so far and really appreciate it all. Plus, the scenery seemed to change every half hour, from beaches to snowy mountains (it actually started to snow) to rolling hills to flat plains.

We arrived in Göreme around 7:00pm and we checked into the Guven Cave Hotel, one of the many hotels in the town that are built into the surrounding cave walls. It’s pretty cozy. After getting some tips from Mustafa, the hotel manager, we grabbed a bite to eat and hit the hay to prepare for the next morning.

This morning we ate our traditional Turkish breakfasts, which all of our hostels have provided and consists of bread, yoghurt, fruit, fresh cheeses, homemade jams, local honey, tea, and coffee (if I haven’t explained that already). Then we drove a few miles out of town to a place called Love Valley and did some morning hiking. Göreme is known for “fairy chimneys”, which are funky looking rock formations, and for the plentiful painted cave dwellings. We climbed all over the ash-drenched hills, crawling into thousands-year old cave homes and sliding down hillsides. It was really awesome to shimmy into an abandoned room dug inside of a giant rock. But, my favorite part was when I got to visit with some local sheep and found my new best friend. 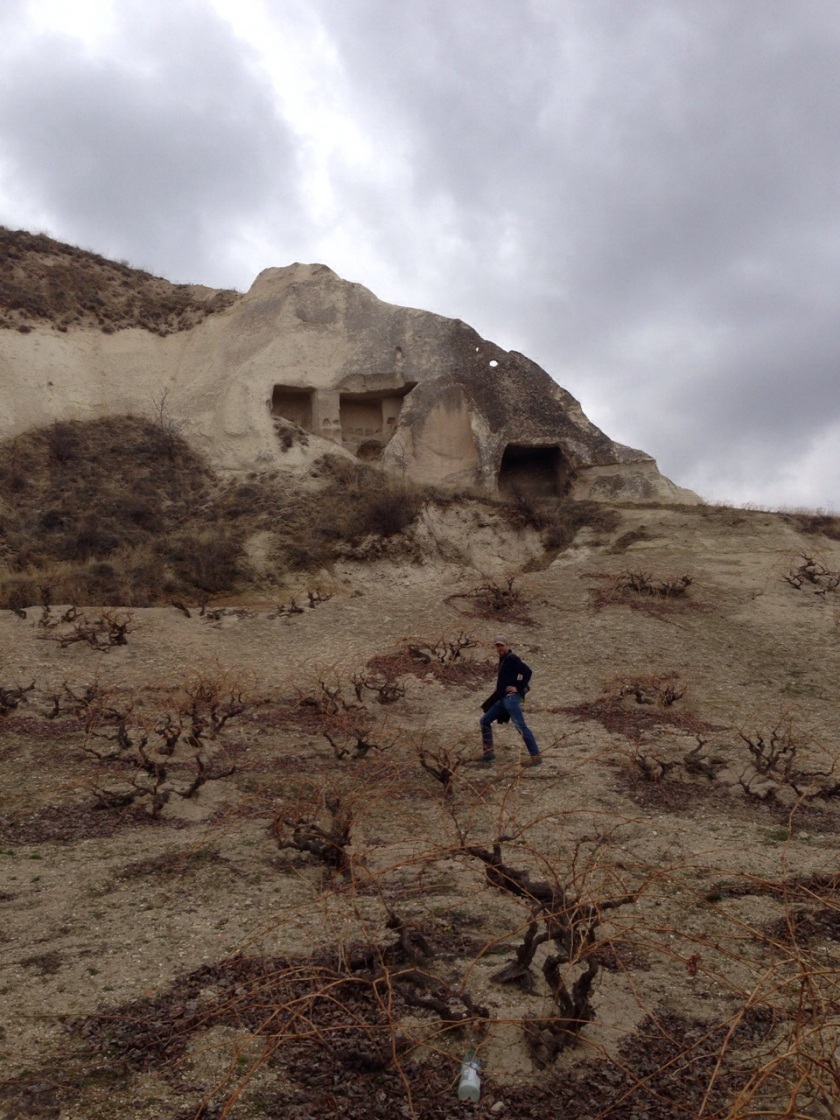 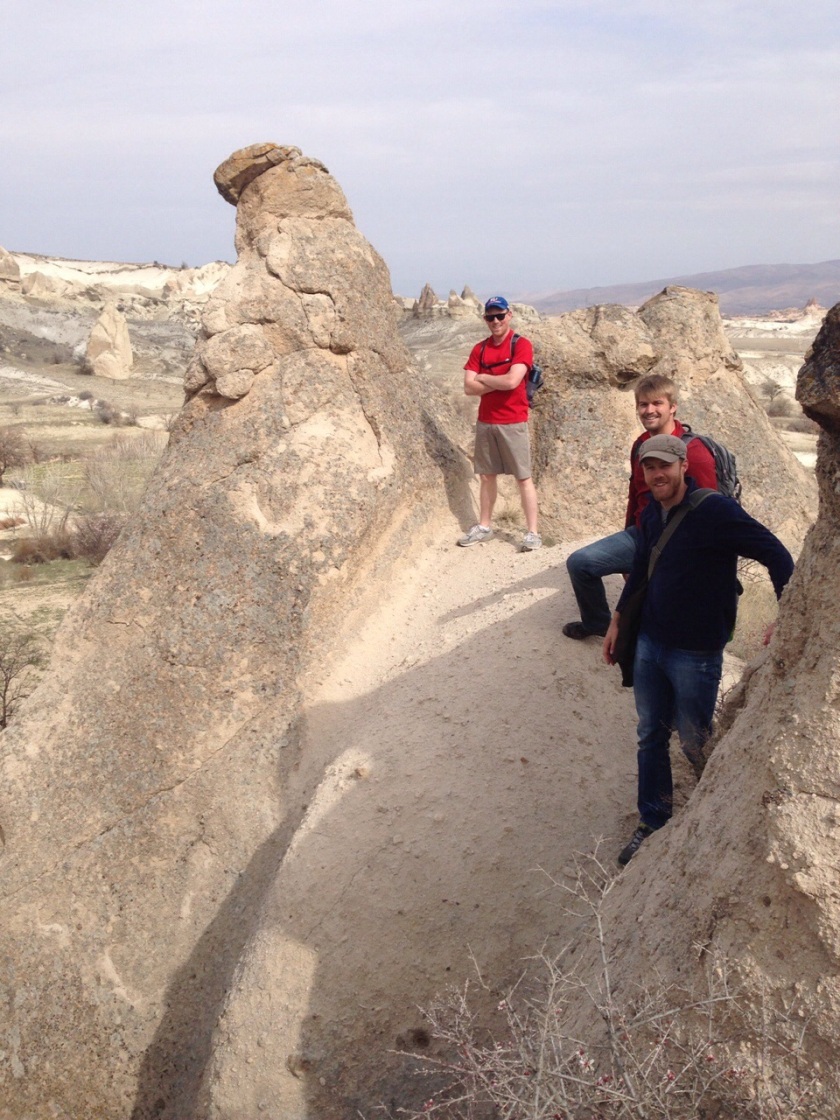 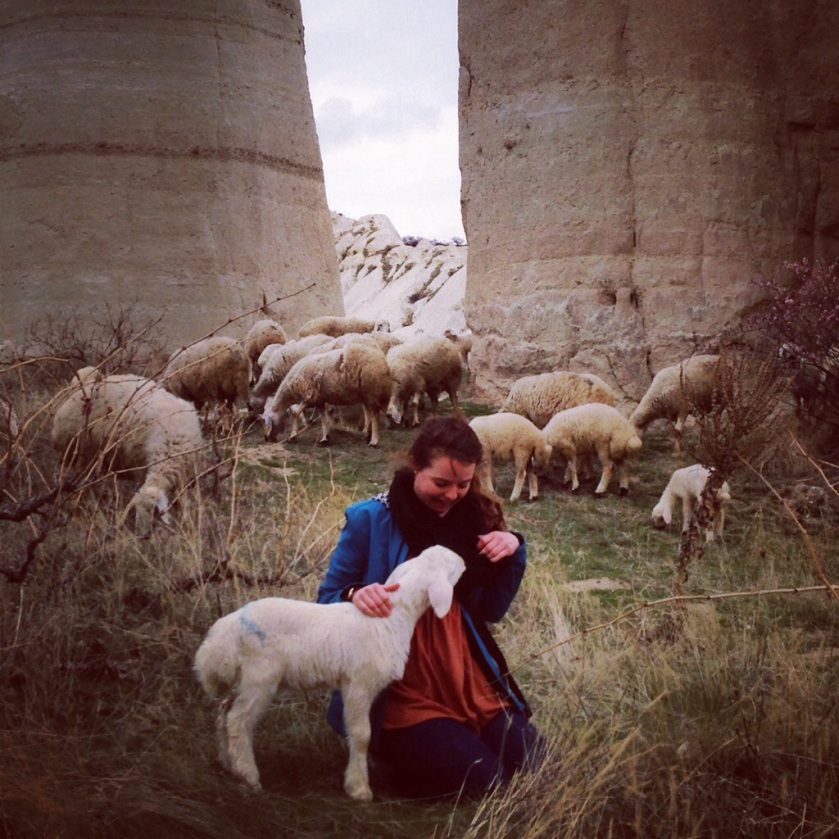 After grabbing a quick doner for lunch, we walked a few miles to the top of Rose Valley, and begun our 4 hour hike where we ducked into cave houses and crawled through rock tunnels and heaved and lifted and tugged ourselves through narrow passes and ancient doorways and prickly bushes. It was lots of fun and adventurous and all the things. We ended our hike with a great view of the sunset, which is said to be the prettiest in all of Turkey.

For dinner, Mustafa recommended a restaurant owned by his friend and we took him up on the offer to make us a reservation. We were picked up by the owner himself and driven to the location — because they said it was hard to find. The restraint was called Nostalji and it was delightful. We all opted for the set menu, which was five courses including classic Turkish dips and fresh bread, a creamy soup, salad, Turkish beans, kafta (meatballs), and, of course, baklava. Epic.

Now, I’m relaxing back in my cave. Tomorrow we spend the morning in Göreme and then drive back to Istanbul where our journey will end. I can’t believe this trip is almost over! It has truly been amazing! 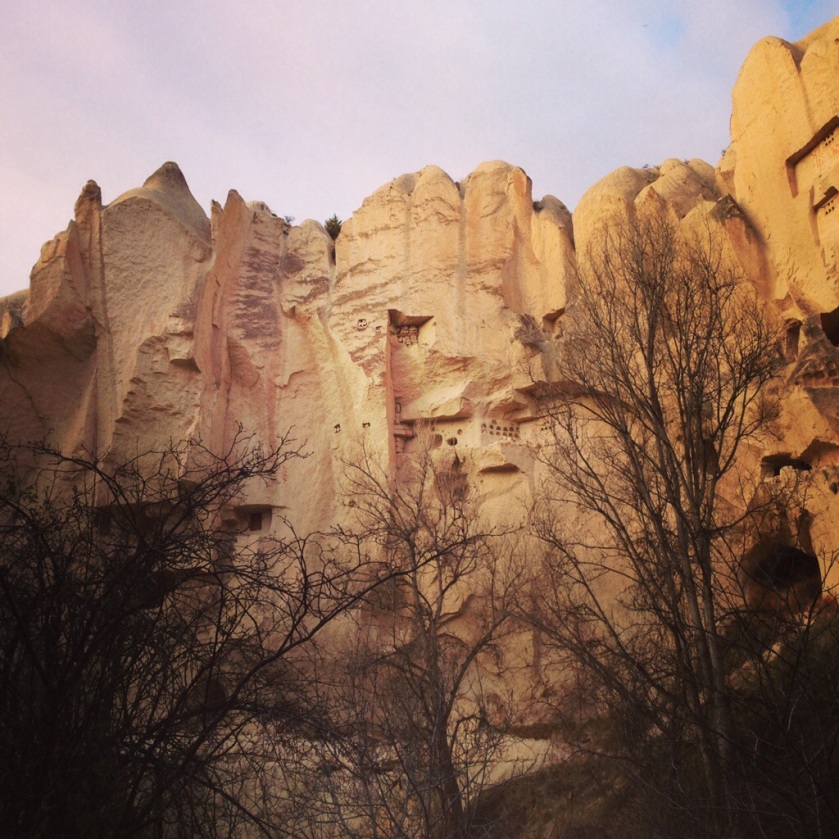 Today was a full day in Istanbul. We woke up at 8:30 and got our complimentary Turkish breakfast which consisted of bread, jam, cheese, cucumbers, tomato, a hard boiled egg, and olives. With coffee and tea of course.

Next we checked out of the hostel, but put our luggage in the luggage locker. Then it was off to see The Basilica Cistern, which is an underground water reservoir that was sealed for a long time, but was discovered in recent history. We ran into my friend Snigdha and her sister in the cistern which was awesome.

The Grand Bizarre was next on our venture and it was huge! So many things to buy — and the prices showed they were used to dumb tourists. We will go back there when we come back to Istanbul at the end of our trip for sure.

Then we went to the Süleymaniye Mosque and walked around. On the grounds of the mosque we got the most amazing view of the city overlooking the Bosphorus river. For lunch, we grabbed a doner (or sandwich) from a street vender. The dollar goes pretty far here so lunch was about $4.50 for a sandwich and yogurt drink.

We then walked to the grave of the mosque’s architect and found an amazing little cafe with a terrace and another wonderful view of the city. I had some ginger tea there which was very very bitter, but good in its own way. 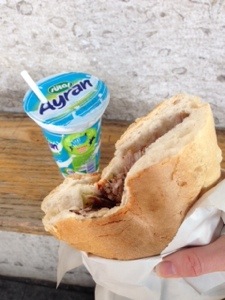 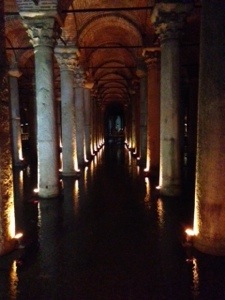 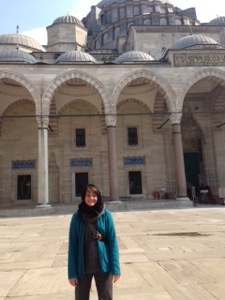 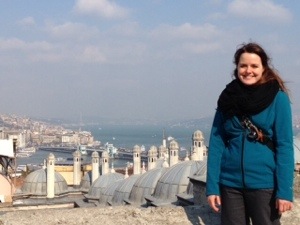 The flight in was pretty nice. Turkish Airline doesn’t play games with service. Upon departure, we received Turkish delight, warm scented hand towels, slippers, and a goodie bag of travel necessities. I watched two movies and slept for about 4 hours, which is nice considering I have insomnia and the plane was kind of noisy. 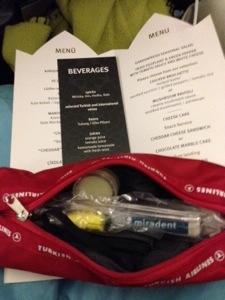 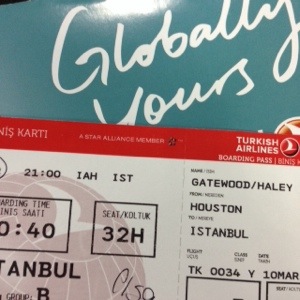 We arrived in Istanbul at 5 Turkish time and quickly made it through customs — because there was no customs, which was strange, but we didn’t argue. Then we hailed a cab and took it to our hostel in a part of the city called Sultanahmet, where we met with the two other members of our group. When we walked up to the hostel, the call for prayers echoed through the city and I knew I had officially arrived in a magical place.

After we settled in, we decided to venture off to explore the city. By now, night had settled in, but the city was still teaming with wonder. We were pleased to discover that our hostel is blocks away from Haggia Sofia and the Blue Mosque. Though late, we were able to go inside the latter and see the amazing architecture (and I was able to get familiar with my head scarf).

Then we made our way to a cozy family-run cafe where I had some Pide (it’s like a pita bread pizza), hot team and fresh baklava — which is the best baklava. And now the rest of my group is hanging out at the bar on the roof of our hostel, while I settle in and process the day.

Tomorrow is another adventure! 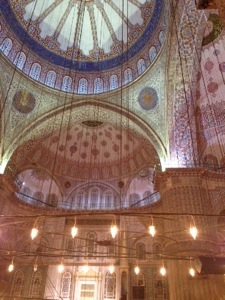 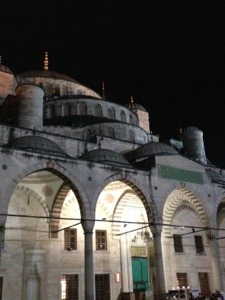 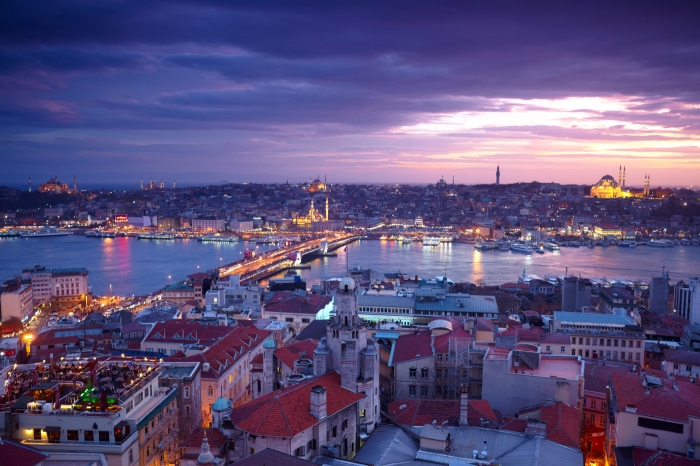 Tonight I leave for Turkey. I booked this trip last May in a spontaneous moment of wanderlust with three guys from my church small group. What began on a lark, has turned into two-week adventure in a country I had never dreamed of visiting.

Over the next 11 days, I will post updates on our whereabouts, activities, experiences – and of course – the amazing amounts of food we’ll ingest.

Below is an overview of where we will be and when. There’s WiFi in all of our hostels, so I hope to post as much as possible (plus I need to keep up with my 365-Sentence Story project). Feel free to follow along as I explore one of the most breath-taking and unique places in the world. 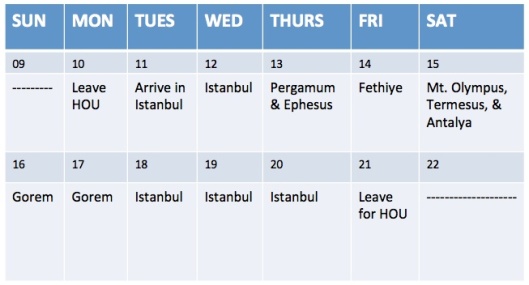 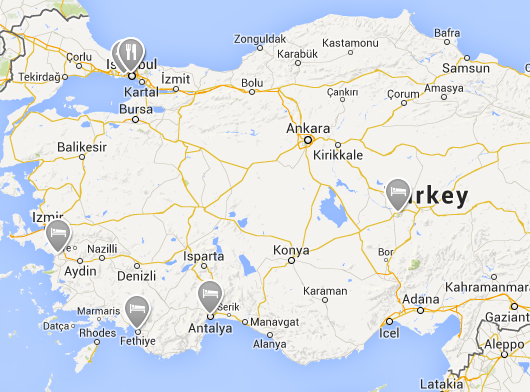