What is a gender role? It is the unsaid (and often screamed) expectation that society has for you about how you should or shouldn’t act depending on your gender. For little boys, it’s the idea that they should like playing with trucks and pretending to be Super Man. For little girls, it’s that they like to wear dresses and play with  Easy-bake Ovens.

Obviously there are problems with this way of thinking, mostly because it shoves all of us into pink or blue boxes. But the “other side” isn’t so shiny. Progressives say they want a world where gender roles don’t exist, where we make up our own social constructs for behavior in a way that each individual sees fit. But tailor-fit social norms are like man-made unicorns: no matter how much you want them to exist, they will always be merely horses with horns glued to their heads.

But my view of gender roles isn’t defined by what society says. Actually, I’m pretty sure that I’d make enemies on both sides of the gender role fence. For me, gender roles are far more complicated and come with far greater expectations. You see, my gender role is based on the Bible and what it says about women.

Now hold up. I know you’re thinking one of two things: either that the Bible says that women should be seen and not heard and can be beaten for disobeying their husbands or that you’re sick and tired of the “Proverbs 31 Woman” movement. And you’re right, although context is key in those instances. But few realize the Bible mentions tons of kick-ass women in both the Old and New Testaments. So here’s a look at my favorite biblical women and the gender roles they present me: 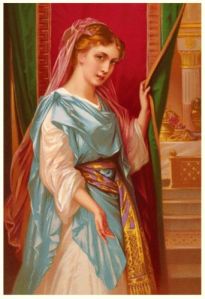 Esther: The Courageous Queen (The Book of Esther)

Queen Esther was one of the many wives of the King of Persia. Society expected – and demanded – that she be silent and only see the King when he asked to see her. But, after some crazy laws were enacted to kill all the jews in the area, she and her uncle concocted a plan to save their people. So Esther went against the social norm (and risked her own beheading) and sought the King’s presence without permission, ultimately saving her people.

Rahab: The Rebel with a Cause (The Book of Joshua) 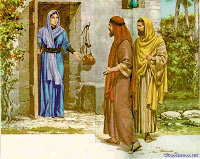 Rahab is my personal favorite. When Joshua sent spies into the city of Jericho, Rahab, a prostitute, hid them from the city guard by keeping them in her home under some flax bundles. She didn’t know the spies. And she wasn’t Jewish. But she knew they were going to do some seriously awesome things and she wanted to be on their God’s side. So she made them an offer they couldn’t refuse, and when they destroyed the city, Rahab and her family was saved.

Deborah & Jael: The Fierce Warriors (The Book of Judges)

Deborah was a female prophetess back in the day and the only female judge – so kudos there. She also led a counterattack against the King of Canaan and won. If that’s not cool enough, she foretold the awesomeness of Jael, wife of Heber, who helped achieve the victory over the King by driving a tent-peg though the head of his military commander (think: Éowyn from the Lord of the Rings movies). That doesn’t sound prim and proper to me.

Ruth: The Working Woman / The “Aggressive” Woman (The Book of Ruth)

Ruth got her M.R.S. degree and then her hubby dropped dead, leaving her to take care of her mother-in-law. So she got to work. She spent hours every day picking up scraps from the field to take care of her now broken family. That’s where she caught the eyes of hunky Boaz. But because of several technicalities he wouldn’t commit to a relationship, so Ruth forced him to declare his intentions by sleeping at his feet (it makes sense culturally, don’t worry). Then they got married and Ruth became the great great-grandmother of King David. So gals, don’t let that guy lead you on.

Mary & Martha: The Anti-Housewives (The Gospel of Luke)

Mary and Martha were sisters and pretty close friends with Jesus since he and their brother Lazarus were bros. When Jesus came over to hang out one day, he actually told Martha to get out of the kitchen and stop working so hard. He told her to be more like Mary who was spending time with him in the living room instead of being Little Miss Housewife. Being the perfect hostess is valuable, but it isn’t the end-all-be-all. Chill out, ladies.

Not only was Mary Magdalene not married (at least no husband is ever mentioned), but she was also possessed by seven demons. How’s that for an E-Harmony profile? But Jesus cast the demons out and welcomed her as one of his disciples. No one ever called her out for not having a husband. She got to do everything all the other disciples got to do. Plus, she was the first person to see Jesus after he resurrected – and was the one who told all the disciples about it. Her marital status wasn’t what defined her, but her discipleship with Christ was. She was the orignal “single lady” who became a major figure in the Christian church.

These are just highlights of some of the amazing women in the Bible. Each of these women’s stories are rich and vast in their own right, and have plenty more important themes to glean that are beyond the subject of this post. But it is from these women that I have cultivated my view of “gender roles.” Mine are based not on what society tells me, but on what God tells me. And He says that I can be married or single, a stay-at-home mom or a working woman, the perfect housewife or a powerful business woman – so long as I do His will and live according to His plan. And that sounds pretty freeing to me.

2 thoughts on “The Bible Defines My Gender Role (Yeah, I Said It)”