I’ve recently discovered my new favorite animal: the hedgehog. I had no clue why I was so drawn to these creatures, so, in classic Haley manner, I decided to do some intense research (via the Wikipedia).

Hedgehogs are adorable little animals that look a lot like miniature porcupines – cute, adorable little porcupines. Just search for hedgehogs on YouTube and you’ll understand their cuteness – especially the one swimming in a bathtub.

They are pretty neat creatures. They are nocturnal and are almost complete insectivores (which means they eat a lot of bugs). They also have sharp quills on their backs that make them look more intimidating than they really are. The spines aren’t poisonous, just sharp and prickly. They have soft underbellies though (which you can see in the hedgehog bathtub video). When threatened or frightened, they roll up into tight balls, causing their spines to point outwards. Sadly, some species are endangered. And that bewilders me, because who really wants to destroy these things? 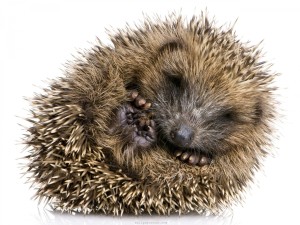 Despite their inherent cuteness, hedgehogs have a slight problem. They cannot touch each other, even when necessary. When it gets really cold, a group of hedgehogs will try to group together to share each other’s warmth, but, their sharp, spiny backs prevent them from ever touching. And so, they must remain apart.

This concept really disturbed me. And then, I realized why I have a strange fascination with the hedgehog…

Schopenhauer and Freud used the hedgehog’s inability to touch to create a social theory called the Hedgehog’s Dilemma. They argued that human intimacy cannot occur without substantial mutual harm. They also use it to explain introversion and isolationism. I use it to explain my fear of relationships.

Since moving away and starting my own life, I’ve discovered a few things about myself. 1.) I can put on an amazingly good show of being confident in myself even though I’m often not, and, 2.) I’m really good at finding everything there is to know about someone without letting them know a single thing about me. In other words, I put up a lot of quills. And no matter how much I want to be close to someone, my quills get in the way. I think I do this because, despite my hard exterior, I have a really soft underbelly and I don’t want to get hurt. That’s why, when threatened, you’ll often find me in a tight, little ball, keeping others out.

And that is what I call, the Haley Dilemma.

And I’m trying to work on that.

2 thoughts on “The Hedgehog’s Dilemma”