Back in June I blogged about how strange it would have been to be the first to pitch the idea of deodorant. Well, I did some digging and found some of the first deodorant ads. I present them to you now: 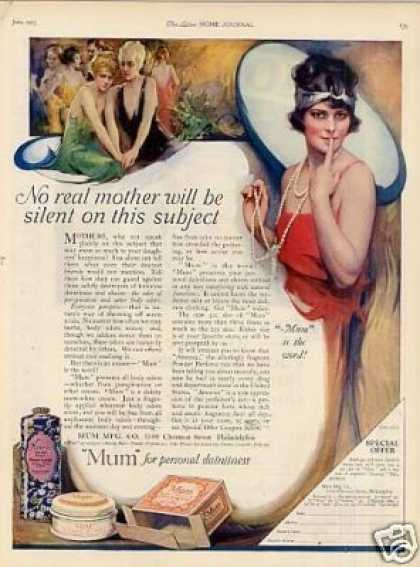 Apparently, one of the first mass-marketed antiperspirants was called “Mum”, which only goes to show how uncomfortable a subject the topic of sweating was. I really like the two women in the top left corner. They kind of look like mermaids who got marooned on a rock and are upset that their personal fashion designer was swept away by the sea. Oh, and the Lady in Red looks super seductive and mysterious with her finger covering her mouth. Ooh la la!

This one’s my personal favorite. Mostly because if I were to pitch an idea like this to one of my Creative Directors they’d just laugh at me. What is that guy doing with an inflatable woman anyway? If this were shown in this century, everyone would think it was for a different product… Oh, early advertising. Where would we be without you?

Side note: are they playing ping-pong?

I’m sure that the photo of the woman in her brassiere was pretty risqué back in the day. I also love the butterfly silhouette that is so gracefully distracting the young woman in the photo. Isn’t the “before” photo supposed to be sad and depressing? She seems pretty happy to me. Sweaty, but happy.