My first experience with a pen pal was in my elementary school years through a program set up by the amazing people at American Girl–don’t try looking it up, they discontinued the program several years later, probably because they had yet to discover the art of pen-pal background checks. Anyway, I was paired with a lovely girl whose name and hometown I do not remember, but at the time I was stoked to be connected to her. We exchanged letters for about a year and I dreamed of the day we’d be able to meet in a Disney Channel Original Movie-type way.

However, my perfect pen-pal dreams were shattered when I received a letter that explained that she no longer had time for a pen-pal. Her reason? I would have taken parents’ divorce, Olympic training, cramming for the Scripps’ National Spelling Bee…anything but the answer she gave me: “I have too much homework.” My little heart was crushed. Fine. Whatever. I acted like I didn’t care, when in reality I was devastated.

10 years later, one of my friends was heading off to Hawaii for college (poor guy) and asked me if I wanted to be his pen-pal. The bitter little girl inside me winced. Pen-pals? But don’t we have Facebook and emails for that sort of thing? I decided to give it a chance and maybe, just maybe, redeem my failed childhood experience. Best decision ever. 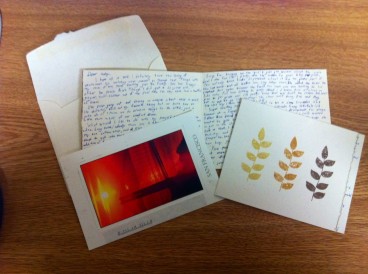 Why Everyone Should Have A Pen-Pal:

In the pre-Internet world it was SO cool to get a letter in the mail. I remember waiting for the postman and praying that he would have something for me. It’s like finding an extra gift under the Christmas tree with your name on it.

2. Good things are worth waiting for.

Forget instant messaging, Facebook chat, and Twitter. Being a pen-pal takes a lot of patience. Not only do you have to wait for your letter to get to your pal, but then you have to wait for them to send a letter back. Even if the postman will brave wind, sleet, snow, and hail, it will still take a good week for you to get a response. But it’s a great surprise when it finally does come and you get to rip open the envelope and read what’s inside–a lot can happen in a week!

This being the modern world, my friend and I are friends on Facebook and follow each other on Twitter–he even reads this blog! So I have to think twice as hard about what I’m going to write about since he basically knows everything I’ve been up to (well, everything worthy of posting to the inter-webs anyway). That always makes for some fun letter-writing because you’ve gotten all the surface-level stuff out of the way and you can get to what’s really bothering you, like world hunger or turtle necks.

I absolutely love stationary. Oftentimes I’ll roam through stores like PaperSource and Papyrus just to look at all the beautiful cards. But, I’ve never had the need to purchase any. Until now, that is! It’s fun to spend a good 30 minutes trying to cram a whole weeks worth of information into a pretty card and slip that sucker in the mail. I like to think I’m sending them on a tropical vacation. Aloha!

So maybe my dreams of pen-pal perfection didn’t come true when I was ten (I hope whats-her-name regrets losing a potential long-distance BFF), but I’ve definitely come to respect the pen-pal process. It’s been a great exercise to write letters again and actually put pen to paper–instead of pixels to screen. I’d suggest that everyone find themselves a friend who lives in a different state (or even just a different city) and try it out. Comment on this and let me know how it goes! Or maybe just write me…

One thought on “Why Everyone Should Have A Pen-Pal”